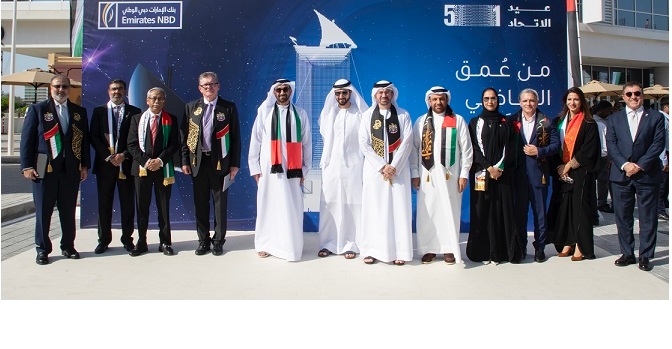 Dubai, xx November 2022:  On the occasion of the UAE’s 51st National Day, Emirates NBD, a leading banking group in the Middle East, North Africa and Turkey (MENAT) region is paying a first-of-its kind tribute to the UAE’s drive and ambition towards space exploration, though the ‘UAE Space Anthem’ – a recreation of the UAE’s national anthem, composed using sounds from outer space.

Validated by the Dubai Astronomy Group, the space anthem has been developed in collaboration with specialised sound engineers and composers using interstellar sounds including those from planets, their moons, pulsars, asteroids, and rovers, among others – all strung together to create a rendition of the much-revered Ishy Bilady.

The anthem was revealed at Emirates NBD Group’s 51st National Day celebrations in the presence of Hesham Abdulla Al Qassim, Vice Chairman and Managing Director, Emirates NBD and Shayne Nelson, Group CEO and members of the senior management and staff. The celebrations included cultural performances, traditional crafts, savouring Emirati food and a showcase of Emirati talent within the bank.

The Group’s space anthem campaign supports the National Space Strategy 2030, which aims to enhance the space sector’s contribution to the national economy and promote the UAE’s presence in the space sector. The UAE’s space program supports the country’s standing as a hub for advanced technology, while also diversifying the economy away from oil and rekindling space culture among young Emiratis.

As a part of the campaign, the bank has developed an animated video film, introducing the UAE Space Anthem and paying tribute to the nation’s space ambitions. In addition, a dedicated webpage on the Emirates NBD website enables visitors to further explore the spatial sounds that the anthem comprises, by hovering over parts of the anthem to learn which special object the sound is inspired by. By clicking on a particular sound, they can also view a library of sounds created by that spatial object.

Moadh Bukhash, Chief Marketing Officer at Emirates NBD said, “The success of UAE’s space programme is a matter of national pride, and we see this as a befitting tribute for a nation as innovative and progressive as ours. Inspired by the UAE’s ambition to conquer space, the anthem represents the progress our great nation has made to establish itself in the space sector.”

He added, “As a national bank driven by innovation, we are proud to present the UAE and its citizens with the UAE Space Anthem, a concept that truly encapsulates our great nation’s ambition to reach for the stars”

JA THE RESORT’S KINARA BY VIKAS KHANNA AND WHITE ORCHID ARE SERVING UP IRRESISTABLE NEW MENUS TO KICKSTART THE NEWSEASON
Tonight starwalker launch at an empresive media gathering at @addressdubaimarina . Starwalker is a Indian brand of tobacco for sheesha.
Yesterday Mr Yasser Sharaf performed the ribbon cutting ceremony of all the three stores @forever21_middleeast, @cottonon_middleeast and @cottononbody at the Silicon Central Dubai.
One of the leading classic car show of the UAE at MEGA Mall Sharjah
French Themed leading restaurant La Brioche recently launched its branch in Dubai Hills Mall. One of the finest French delicacies. The chef bring innovative menu as well. Above all the dining experience is superb and the ambience is absolutely French.
Alsaad Fashion show