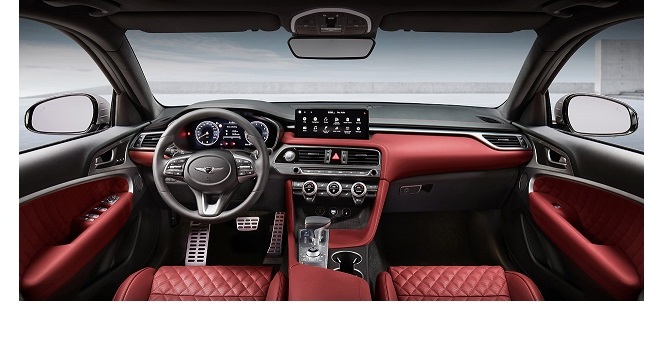 The name “Shooting Brake” refers to a car body style that is firmly rooted in the automotive history of Europe, and is a reoccurring theme for manufacturers in the premium luxury sector.

First premiered at the 2021 Goodwood Festival of Speed, the G70 Shooting Brake is based on the new G70 sedan, with the added practicality of increased trunk space. It highlights the athletic aspect in the balance of ‘Athletic Elegance,’ which is Genesis’ design identity.

The G70 Shooting Brake will be an important model for Genesis. As a luxury car, it will offer customers greater practicality, and it will further expand the Genesis lineup to meet various customers’ needs.

Inheriting its design from the new G70 sedan, the G70 Shooting Brake’s signature Crest Grille is set lower than the Quad Lamps, which spread outward evokes a sprinter’s pre-race posture and highlight the model’s athletic design.

When viewed from the side, the combination of the single-piece glass hatch that extend to the rear and the “floating type” integral spoiler creates a unique impression to the exterior that communicates the G70 Shooting Brake’s athletic intent.

At the rear, the trunk, which maximizes space by moving the tailgate hinge forward, embodies the benefits of functional design. The Quad Lamps, which represent the epitome of Genesis’ design identity, extend to the surface of the hatch to create a unique impression.

Omar Al-Zubaidi, Head of Genesis Middle East & Africa commented “The G70 Shooting Brake combines the type of athletic exterior design that reflects Genesis’ design identity with the practicality of the Shooting Brake. We look forward to introducing this luxury vehicle to the Middle East & Africa market, which has already received huge praise from the international community.”

As a design-focused brand, Genesis has introduced fascinating models that embody ‘athletic elegance’, including The G70, The G80 midsize luxury sedan and The G90, as well as The GV70 and The GV80. With Genesis Motor distributors based throughout the Middle East and Africa region, Genesis will be opening dedicated standalone showrooms in the region in the near future. For more information on Genesis and its new definition of luxury, please visit www.genesis.com