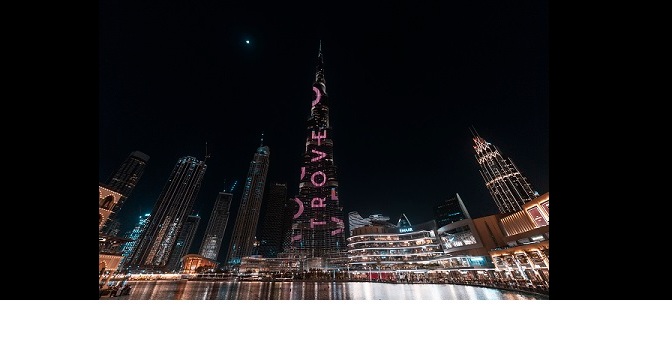 Following a successful launch early April, the most talked about restaurant in Dubai, Trove, celebrated it’s grand launch by lighting up the iconic Burj Khalifa in pink making it the first F&B brand in the world to be projected on the Burj.

Trove has been at the forefront of bringing distinctive and astonishing experiences to Dubai, merging art and gastronomy and their grand opening party was nothing short than extravagant! Attended by industry elites, celebrities and key public figures, Dubai Mall experienced an event full of plush celebrations – from DJs spinning decks, to dancing waiters, neon paint and glow in the dark beverages. In a month time, the venue hosted A-listers such as James Lebron and Steve Aoki, making Trove the newest hospot in Dubai. Founders and restauranteurs Orkan Doganci and Ahmet Oytun Cakir merged ventures into the creation of this unique venue where every aspect was the result of a long journey of creation.

“ We designed Trove in a way which was never implemented before, we’ve created a unique menu which caters to everyone’s taste, opened in the world’s biggest mall attracting millions of tourists yearly and May 9th, we celebrated our achievements by having our brand Trove projected on the iconic Burj Khalifa” – founders and owners Orkan Doganci and Ahmet Oytun Cakir.