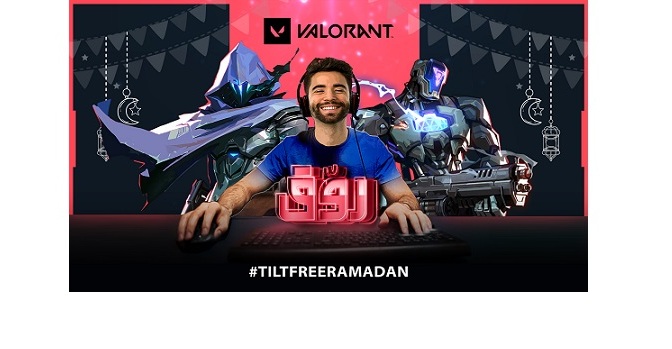 * Covering League of Legends, VALORANT and WildRift, RIOT Games has arranged a plethora of activations throughout Ramadan for all gamers

Dubai, UAE – 19 April, 2022 – This Ramadan, RIOT Games Middle East and North Africa celebrates with a wide range of tailored Ramadan-themed experiences and competitions. From the tales of the Hakawaty, to the Ramadan competition streams –The Syamathon, this year’s holy month comes packed with activities uniting players all over the region through the love of gaming.

In the spirit of togetherness and Ramadan gatherings, RIOT Games launched the RIOT Ramadan Tent, where players could chat and look for friends on a dedicated Discord server with separate channels for each game. Participants are encouraged to take part and enjoy the themed activities on the server, with appearances from community members and quizzes to test their knowledge on fan favourite games like VALORANT, League of Legends, and WildRift, as well as Legends of Runeterra and Teamfight Tactics.

Following iftar and daily Ramadan duties, gamers can gather every night on the Hakawaty channel on discord at 01:00 AM Dubai time, to listen to other gamers in their community share their unique League of Legends tales. Players will take turns each night telling stories and anecdotes and bonding over topics they love.

As for the Wild Rift fans, RIOT  Games invites players to tune in to the exclusive second season of Rift Nights. The late-night show will feature a surprise host interviewing famous personalities from the WildRift community, engage the listeners in casual gameplay sessions, and end the night with a merch giveaway segment.

Paying homage to the traditional Ramadan fawazeer, RIOT  Games will give players a chance to test their knowledge about the different games through a series of fun trivia (Fawazeer RIOT ) every day of Ramadan, featuring questions that will revolve around League of Legends, Wild Rift, and VALORANT. Players can enter a specific channel on the discord server and engage with the trivia questions to try and maintain their position at the top of the leaderboard; those with the highest scores will get a chance to win incredible prizes by the end of the holy month.

To honour the spirit of kindness and friendship, RIOT  Games will launch a set of gameplay challenges around the concept of “Celebrating Goodness” for their trifecta of fan-favourite games (League of Legends, VALORANT, and WildRift) focused on wholesome gaming, and exemplary team fights. For League of Legends and WildRift, the challenges will be posted on social media encouraging players to submit these beautiful moments that embody the spirit of kindness, the top submissions will receive special prizes relating to their relevant game. As for VALORANT, the challenges will be launched on RIOT  Games’ UGC platform (Take Your Shot), with three winners selected per challenge and rewarded with Valorant points.

Focusing on one of Ramadan’s key teachings, RIOT  Games also launched a challenge known as #TiltFreeRamadan. The streaming competition features 15 influencers (9 of which will be playing VALORANT, and 6 will be playing League of Legends) who will attempt to control their anger to promote a positive gaming experience and genuine interactions within the gaming community. Each day, one of the influencers’ streams will be monitored, and those who kept it tilt-free, will receive a special package from RIOT  Games. As a special surprise, gamers will be able to watch hilarious takes of their favourite players trying to hold back their gaming rage on RIOT  Games’ social media channels.

Finally, RIOT  Games has announced a thrilling series of tournaments called Ramadan Stars. Players will engage in challenging game play and advance to the grand finals where they could be playing against a regional streamer, RIOT er, pro player, influencer, or even a surprise public figure (the Final Boss). The tournaments will differ based on which game the players are into and will be organised on the RIOT  Games Ramadan Discord server. The famous boss will be announced one day in advance with a surprise twist to make it harder for them to face their opposing stars.

“We are proud of the communities that our games have created, and value the spirit of collaboration and teamwork,” said Luciano Rahal, Marketing Communications and PR lead at RIOT  Games MENA. “Which is why at RIOT  Games we are excited to announce our Ramadan activities and tournaments to unite our loyal gamers under the umbrella of kindness and unity. We are thrilled to take part in celebrating this holy month with our community and hope to continue spreading positive gameplay and interconnection.”

RIOT  Games was founded in 2006 to develop, publish, and support the most player-focused games in the world. In 2009, RIOT  released its debut title, League of Legends, to worldwide acclaim. League has gone on to be the most-played PC game in the world and a key driver of the explosive growth of esports.

As League enters its second decade, RIOT  continues to evolve the game while delivering new experiences to players with VALORANT, Legends of Runeterra, Teamfight Tactics, League of Legends: Wild Rift, and multiple work-in-progress titles, while exploring the world of Runeterra through multimedia projects across music, comic books, TV, and more. Founded by Brandon Beck and Marc Merrill, RIOT  is headquartered in Los Angeles, California, and has 2,500+ RIOT ers in 20+ offices worldwide.