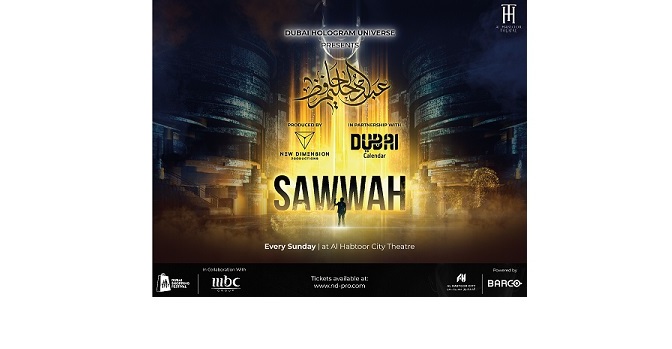 FIRST-EVER ‘DUBAI Hologram Universe’ TO BE LAUNCHED on 30 January

Produced by NDP, the first show will kick off during the last week of Dubai Shopping Festival on 30 January with an exquisite ‘Sawwah’ dubbed evening, in which hologram technology will bring Abdel Halim Hafez back to perform on stage accompanied by performers and musicians, with some of his most famous romantic songs, all set to dazzle the audience for 90 minutes.

Commenting on the launch, Ahmed Al Khaja, CEO of Dubai Festivals & Retail Establishment (DFRE) said: “We are delighted to partner with NDP in launching such an innovative initiative as the ‘Dubai Hologram Universe’ that will turn the spotlight on legendary music icons through hologram technology. Across our annual line-up of festivals and events, we have always created stimulating activations and experiences for residents and visitors to enjoy, and we are excited that the launch of the first ever ‘Dubai Hologram Universe’ series, is taking place just as the latest edition of Dubai Shopping Festival draws to a close, reaffirming Dubai’s position as a year-round international entertainment hub”.

Hasan M. Hina, Founder and Executive Producer & Director of NDP, said: “We are proud to announce our joint initiative with DFRE as ‘Dubai Hologram Universe’ marks the first step to achieving our long-term strategy to position Dubai as the capital of Hologram entertainment. We aim at producing this new form of breakthrough digital performances and make it available to the audience on weekly basis, with new and unique shows every month, hence creating unforgettable moments for them.”

Mohammed K. Al Habtoor, Vice Chairman and CEO of Al Habtoor Group, said: “As Dubai’s premiere entertainment destination, we at Al Habtoor City Theatre take pride in this creative collaboration with New Dimension Productions for Dubai Hologram Universe. For the last four years, Al Habtoor City Theatre – home to its resident production of La Perle – has shown unwavering commitment in being a leader in live entertainment and has enthralled tourists, business travelers, and residents.  By extending our show dates and times with Dubai Hologram Universe, we gladly open our doors to welcome a new wave of spectators seeking to uplift their theatrical experience.

With two creative powerhouses joining together, this collaboration continues to mark Dubai as the epicenter of unique world-class entertainment.”

Dubai Hologram Universe is the world’s first regular hologram series to focus on immersive digital entertainment. The Abdel Halim concert will be the centerpiece of the new concept’s series, which will also include gigs by the Diva Umm Kulthum, Warda Al-Jazairia, Frank Sinatra, and others, allowing the crowd to witness a landmark moment for the world’s entertainment industry.

About Dubai Festivals and Retail Establishment

Dubai Festivals and Retail Establishment (DFRE) is responsible for developing Dubai’s retail and festival sectors and supporting the positioning of Dubai as a world-class tourism destination with year-round family entertainment, shopping and events.

NDP is a leading motion picture and hologram entertainment production agency based in Dubai and established in 2016. NDP’s mission aims at pushing to revolutionize the entertainment industry with the introduction of hologram live entertainment, using its experience in digital human productions, to produce state-of-the-art photo-realistic content that speaks to wide range of music genres audience of all ages. NDP core services include Motion picture production, Hologram show productions, Hologram solutions consultation, Video production and SFX, and Music composing and audio restoration.

NDP had produced and showcased previously a series of hologram live performances for renowned artists such as the legendary Umm Kulthum at various locations in the world, Dubai Opera, Abdeen Castle in Egypt, Kuwait Opera House, and Al Ula Maraya Theatre in Saudi Arabia, all of which were met with huge success and admiration.

This uniquely designed theatre creates a one-of-a-kind experience for audience members as each seat guarantees a magnificent view of the show.  The 1,300-seat theatre only contains 14 rows, which offers an intimate experience and places the audience face-to-face with the action. The visuals are accompanied by high-definition speakers embedded in the walls behind the seat.